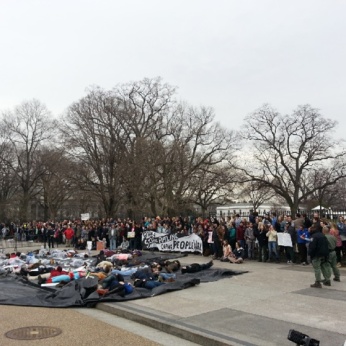 The Divestment Convergence brought leaders of college divestment organizations together for a strategy session, in which students broke up into smaller breakout groups to listen to speakers, brainstorm organizing strategies, and network with other youth leaders. The large turnout signifies the growing national divestment movement, with campaigns underway at over 300 universities as well as cities and religions institutions.

Students met for a morning rally at Georgetown University on the second day before beginning their march to the White House. BC students held a sign reading, “Boston College says no KXL,” marching and chanting in unison with 1,200 others. Upon arriving at the White House, several indigenous environmental leaders shared stories before 372 students engaged in civil disobedience to ensure that the students’ opposition to the Keystone XL pipeline is heard. Six members of BC Fossil Free were arrested; a powerful start to their spring break.

Boston universities had an enormous presence at XL Dissent, sending three packed buses to Washington, D.C. for the Divestment Convergence and protest. After spring break, BC Fossil Free members intend to ramp up their campaign using the energy, enthusiasm, and organizing skills they gained from the event.

Boston College Fossil Free (BCFF) is a group of undergraduates, graduates, alumni, faculty and staff fighting the climate crisis by encouraging Boston College to immediately halt new investments in fossil fuel companies and completely divest from fossil fuel interests within five years. We work in solidarity with student groups in over 300 campuses across the United States.