Cambridge, MA – Alumni, parents, and students from universities across the country have launched a bold new Multi-School Fossil Free Divestment Fund. The Fund facilitates tax-deductible donations for those who would like to give to an educational institution but are hesitant because the institution invests in the environmentally, financially, and morally hazardous fossil fuel industry. The Fund will hold and invest donations until a school’s endowment:

For participating schools unable to stand up to fossil fuel companies by the end of 2017, their funds will go to participating schools that have divested. Morgan Curtis, a Dartmouth student, explains the timeline: “Back in 2011, the IEA [International Energy Agency], hardly a radical organization, found that 2017 was the cutoff for building any new fossil fuel infrastructure if we are to avoid catastrophic climate change. We haven’t even hit 1° C yet, and it’s already been disastrous and lethal, especially for those least responsible.”

The Fund allows parents, alumni, faculty, staff, students, and others to leverage their donations to help universities do the right thing. As Brandeis alumnus Naveh Halperin explains, “I want to give to Brandeis because I had an amazing experience there, but I can’t donate knowing they’re investing in morally unjust industries that undercut their mission to strive for social justice.” Since donations will go to other universities if a given university has not divested, the Fund creates a friendly competition to push for action at a level commensurate with the urgency and magnitude of the deepening climate crisis. “Money donated acts as a financial carrot, but if universities continue to support the rogue fossil fuel industry, those donations turn into a stick” says Chris Nidel, an MIT alumnus.

While financial contributions are important, the number of donors is equally powerful. College rankings are important for many institutions. Five percent of those rankings are derived from alumni giving, meaning even small donations matter. Boston College student David Corbie says he is “working on getting others to use their ‘senior gift’ as a way to encourage our school to stand up for climate justice.”

Fossil fuel divestment campaigns have been underway for years. Their aim is to stigmatize the fossil fuel industry and loosen the iron grip they have on our political and economic system. Hundreds of institutions–from schools and churches to public pensions and philanthropic foundations–participate in divestment. Many have already divested. The Fund, carefully designed over 18 months, adds one more arrow to the quiver in the fight for climate justice. 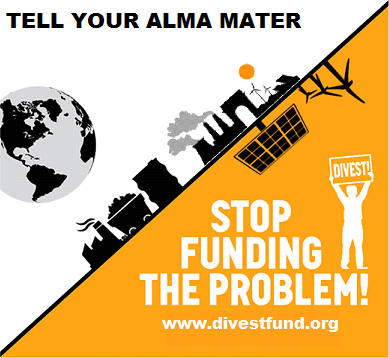 A sample tweet (with the right number of characters to allow for the image) is this:

Donate to @DivestFund Your Alma Mater receives the $ only when they stand up to #FossilFuels #divestfund.org

Thanks so much for your donation, spreading the word, and all the good work you do.

Thank you to all our friends, supporters, and allies for standing up to the BC administration.

Check out the event photo album.

To watch all the speakers visit the playlist.

At the beginning of the rally, without a hint of irony, BC Dean Carol Hughes and Vice President Barbara Jones disallowed amplification of music performed by BC student band Jammin’ Toast. They cited City of Newton ordinances. However, student organizers spoke with Linda Finucane and other Newton officials. They were told no permit is necessary for amplified sound: “Boston College is private property. People have music all the time on private property, weddings and such, and there is no permit required.” Even though students articulated this to the Dean and Vice President, Jammin’ Toast was forced to perform an acoustic set that was very difficult to hear.

A wide range of speakers–who were allowed to be amplified–poignantly connected how the Boston College administration makes it difficult for students to organize, how they segregate students on campus, and how they urge students to “Set the World Aflame” but repress and intimidate when students try to do so on campus. Alyssa Florack from Climate Justice @ Boston College said: “Since we are not a registered student organization, we cannot hang fliers, we cannot host events, and we can’t even meet as a group. Right now, I’m technically breaking a rule by even identifying myself as a group…You’re supposed to want to change the world, but are only allowed to do it when you graduate from the BC bubble.”

Robert Ryan, a “Double Eagle” earning undergraduate and graduate degrees at Boston College noted that certain stakeholders, like wealthy donors, have too much influence at Boston College. He said, “The focus [at BC] is on individual acts of charity and things like that, while there’s not enough emphasis on these deep endemic systemic problems. Like how you get BC students to realize you have to change the problem from where they start.” He then detailed how two alumni were removed from BC campus at an alumni reunion event this last summer.

Lakeisha St. Joy began by asking the audience, “are you angry” “yes!”, “are you ready for change” “yes!” St. Joy said it was a shame that she would only have three Black professors by the time she graduates. “How can BC claim to be diverse and celebrate it” she asked, “when students of color cannot find any buildings on campus named after people who represent them?” Stan Robinson, formerly with BC radio station WZBC, explained how he was forced to resign after censorship became so extreme. Other speakers can be found here.

While initial planning for the rally centered around an announcement that BC endowment manager Cambridge Associates has created a fossil free fund (divested from fossil fuel companies), there was such a large amount of student unrest that the Rally became a venue for wide-ranging issues to be brought together in one place and build power for change.